My work computer is running Windows 8.1 on a touch-screen ThinkPad X1 Carbon, which I’ve come to appreciate more than I initially expected. Though I still do not frequently venture into the “Windows 8” or “touch” mode, I find the Windows 8 desktop experience to be snappy, fairly bug-free, and efficient — perfect for getting work done. At home, and for most of my personal projects, I am still an Apple guy. With that, most of my exploring, tinkering, learning and building happens in OS X, so I very well may be late to the game on this subject (turns out I am).

On both OS X and Windows 8, I run Chrome Canary alongside the Dev channel of Chrome as my main browser, along with Firefox’s nightly builds. Several weeks ago, when in Chrome Canary on my Windows 8 desktop, I did something I hadn’t done in quite some time — just to see what had changed, if anything. I clicked the “Relaunch Chrome in Windows 8 mode” item in the main menu. For those of you who haven’t tried Windows 8, “Windows 8 mode” is the formerly-known-as-Metro-style touch interface that you’ve likely seen in recent commercials. There are two experience modes in Windows 8: Touch mode (“Windows 8 mode”) and the traditional desktop mode. So, I figured I’d see what Chrome Canary was up to in the immersive Windows 8 mode. 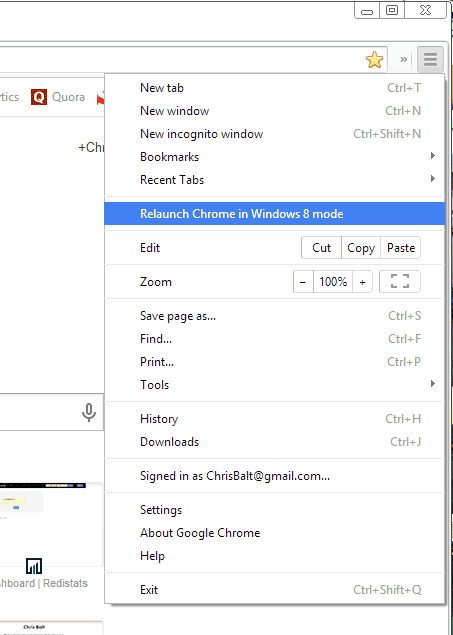 What I saw initially was not surprising, a full-screen replica of what I was seeing in the desktop mode. What was surprising, however, was the native-esque app toolbar that showed up along the bottom of the screen (mind you, this is an immersive, non-windowed experience in Windows 8). 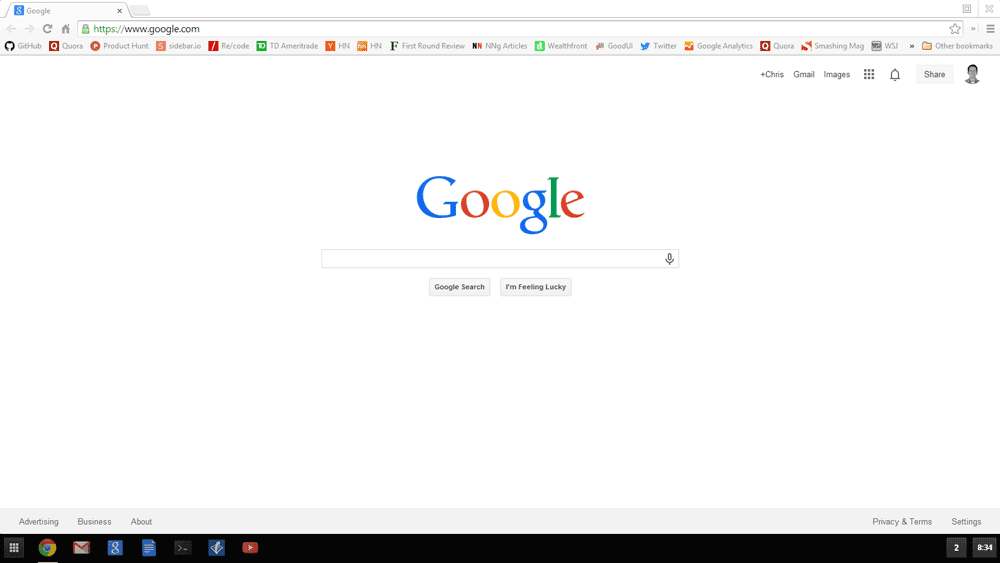 Intrigued, I decided to poke around a bit. What I noticed was surprising, brilliant, and curious. First, what I was seeing was a browser window within an application window: 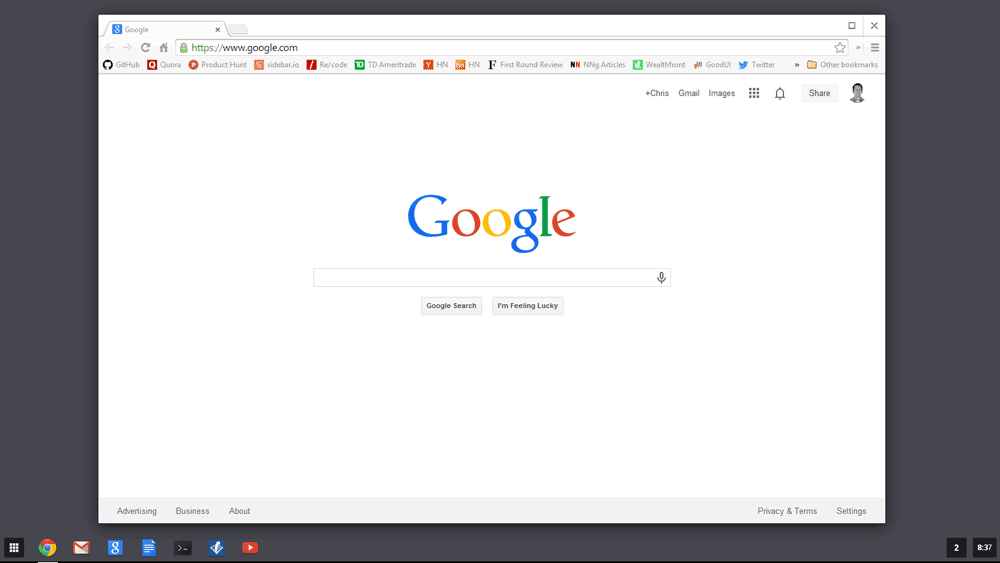 Compare this to a simple screenshot of the true Chrome OS running on a Google Chromebook: 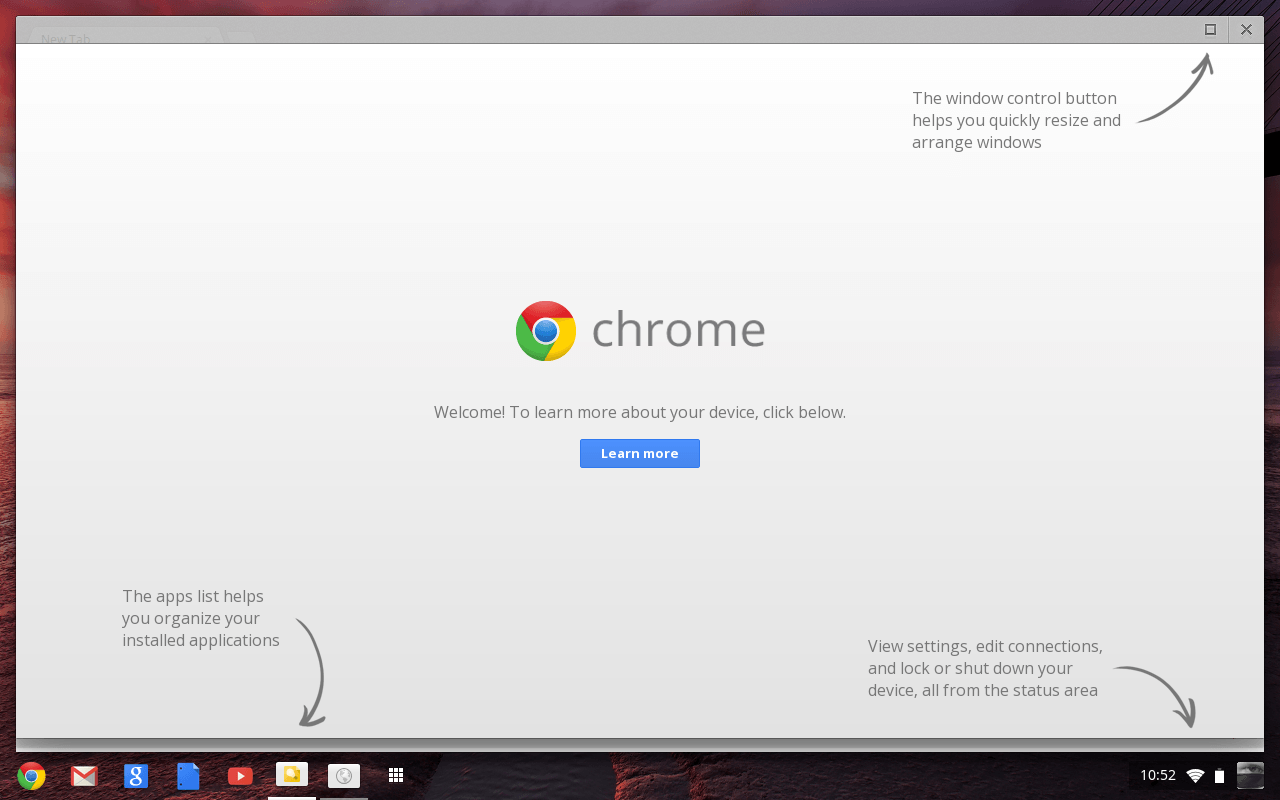 Not much difference, right? Digging in a bit more in my Windows 8 experience, you’ll see that I was able to open multiple browser windows within the Chrome application just like you would on the Chrome OS: 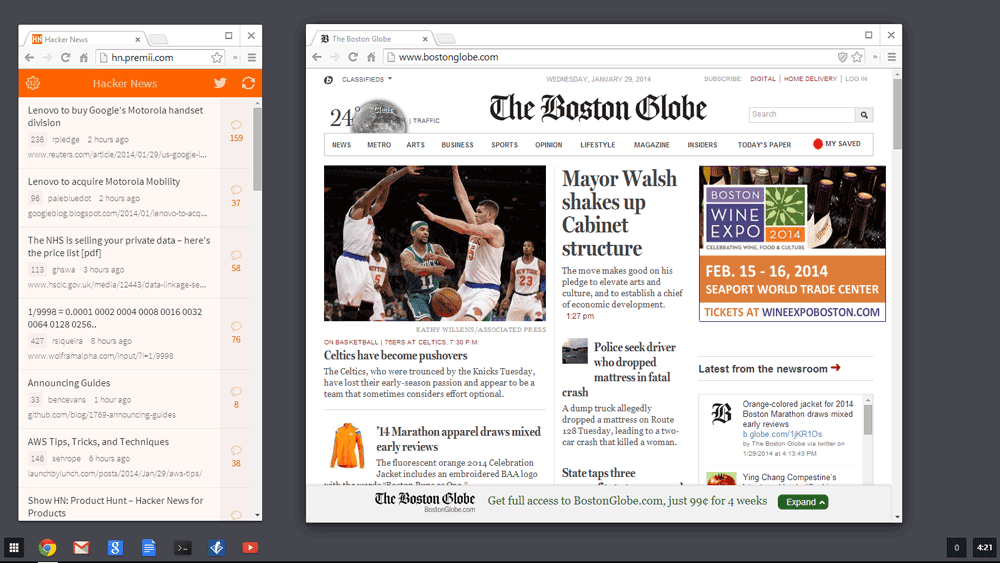 Also, and perhaps most surprisingly, look what happens when I hit the infamous Windows Key: 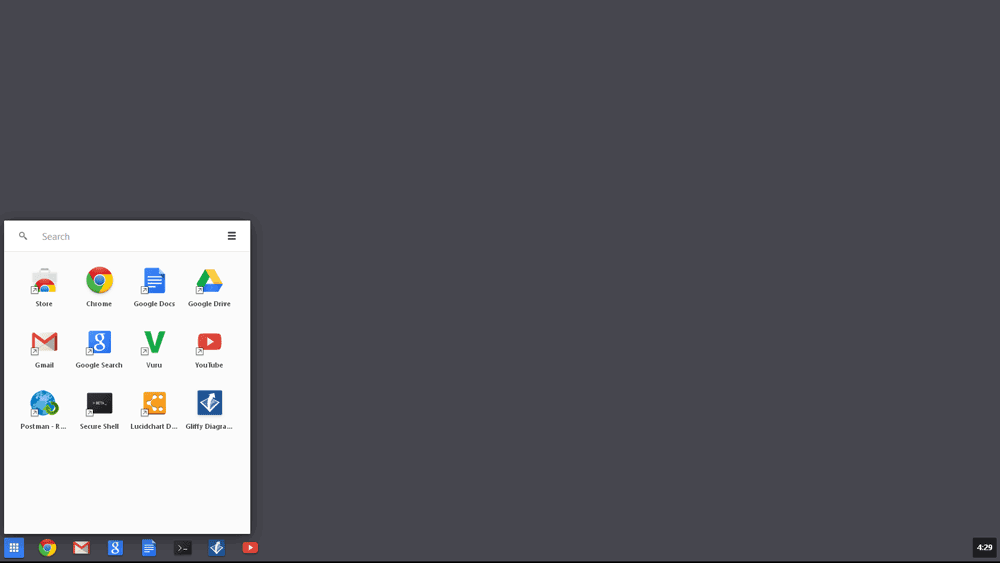 What typically displays the Start Menu now brings up the Chrome App Launcher. From here, I can launch a whole host of apps that could potentially replace the functionality of traditional desktop applications. Further, you can even specify that particular apps be launched in a windowed mode to mimic the behavior of a native desktop application rather than appearing to be in a browser window. (Though, in fact, all of these applications are actually running in the browser.) 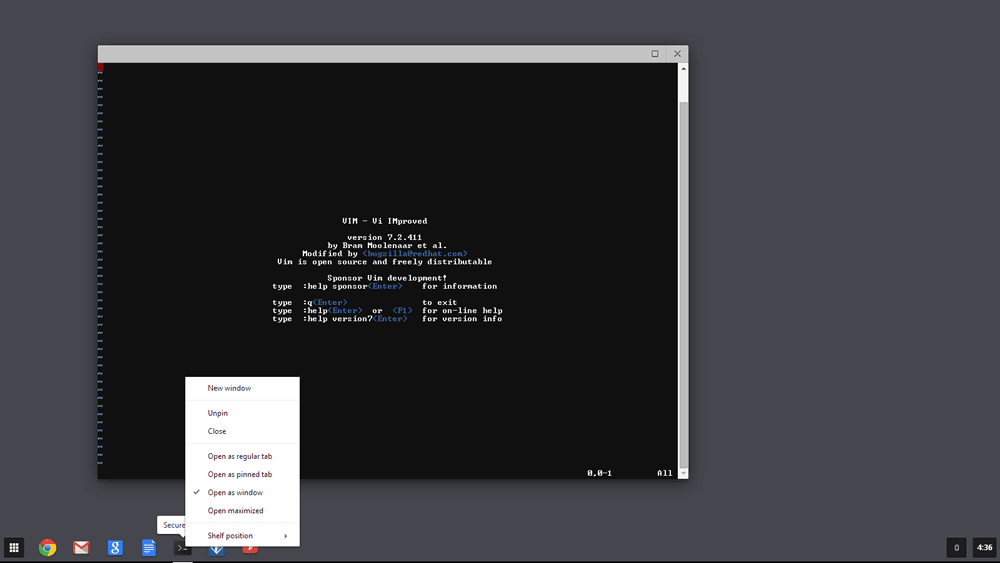 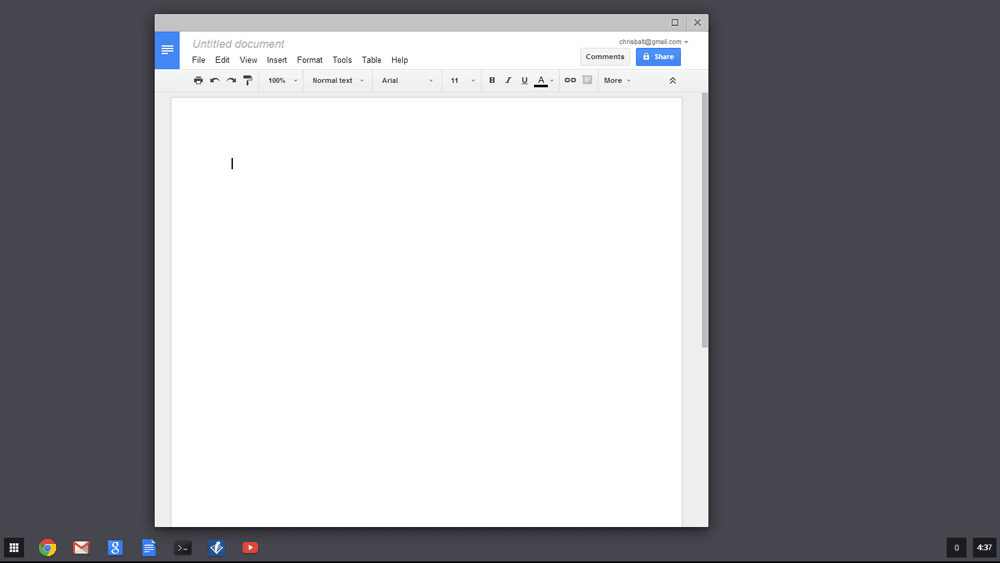 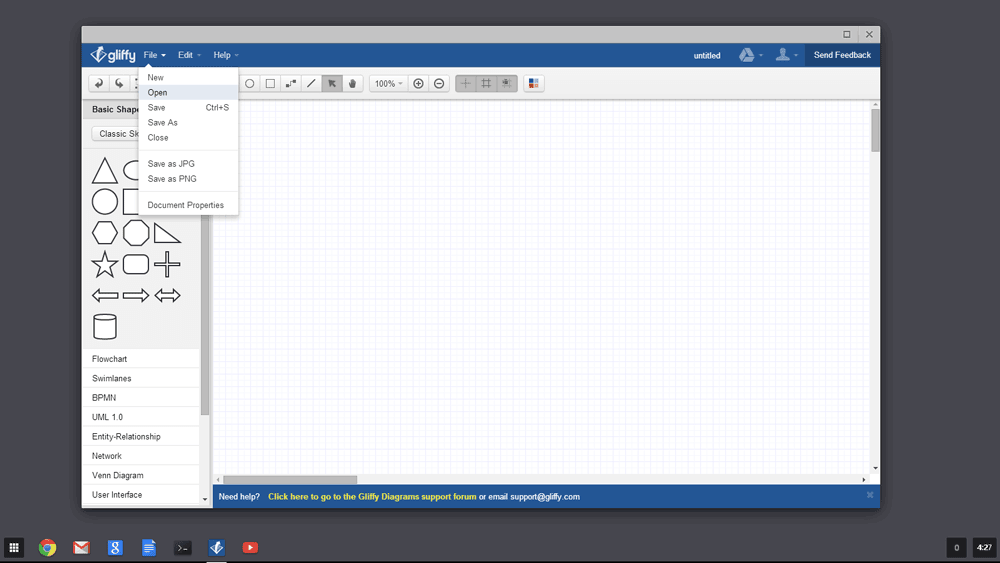 And one more thing: Google Now and my Chrome notifications having a head seat at the table down there in the taskbar: 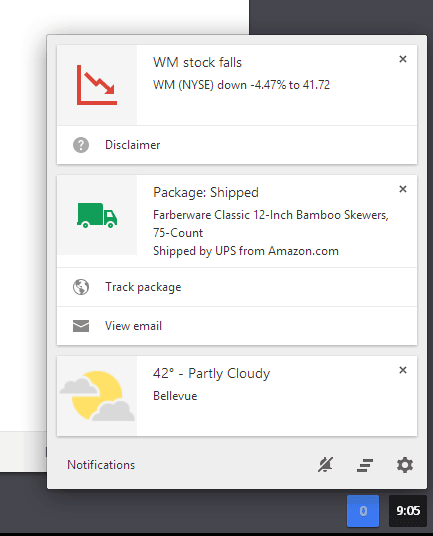 As more and more of what we do on a daily basis to do our work is done in the browser, this direction only makes sense. Though I’ve not yet had the opportunity to try out Chrome OS or a Chromebook, I would guess that the experience provided in this immersive Windows 8 mode is strikingly similar, sans the desktop.

Give Users What They Want

This leads us into what is very likely part of Google’s overarching product strategy with Chrome and beyond. We spend most of our time in a browser anyways, so why not make it the operating system — or at least the UI? Why not skip all the stuff you don’t need and get right to the browser? Hence, the browser as the operating system? This makes perfect sense, and provides users with more of what they want and less of what they don’t want. As soon as the average user realizes that they can ditch the desktop and efficiently perform all their tasks on the web, I predict that this concept will become a familiar one.

So, why introduce this into Windows 8? Well, the immersive Windows 8 mode pretty much asked for this. Its immersive UX and chromeless UI (forgive the unintended pun) lends itself perfectly to an operating system disguising itself as an simple app. Brilliant, if you ask me, and almost makes me want to begin working in the Windows 8 immersive mode solely for the purpose of testing out the Chrome OS.

Disclosure: I work for Microsoft. However, I don’t speak for Microsoft. Heavily insert the “opinions are my own” disclaimer here. I have absolutely zero insight or voice into the product strategy and roadmap of Windows or its Internet Explorer product.

I suspect this pending move has not gone unnoticed in Redmond. Certainly Microsoft and Windows haven’t let Google’s push into the hardware space progress without a fight, given Microsoft’s latest rendition of it’s “Scroogled” campaign tearing apart the Chromebook. However, Chrome’s specific foray into the Windows 8 experience is perhaps a hat tip to the still dominant market share of Windows. If the Chrome OS is to capture the heart of Windows 8 users, this is one way to do it. If Google is attempting to capture the heart of users and lure them into its operating system, this is but one entry point.

As users begin to do more and more in the browser alone, their willingness to do all of what they do in an immersive experience like this will become a more common scenario. Once users trend this way, they may begin to wonder why they must put up with all the other “stuff” that makes up the operating system, be it Microsoft’s Windows or Apple’s OS X, leading them to consider something like Google’s Chrome OS.

Is the Browser the Future Operating System?

So, this begs the question: Is there still a need for all the “extra stuff” in a full-fledged operating system like Windows or Mac OS X? Is the future based on simple, Linux-based operating systems with nothing but an immersive browser and the essential hardware APIs? If it’s the latter, I believe that concepts like Google’s Chrome OS provide a significantly-improved experience to users who simply turn on their computer, wait paitently, and open the browser; this Windows 8 experience is simply an invitation to experience the platform.